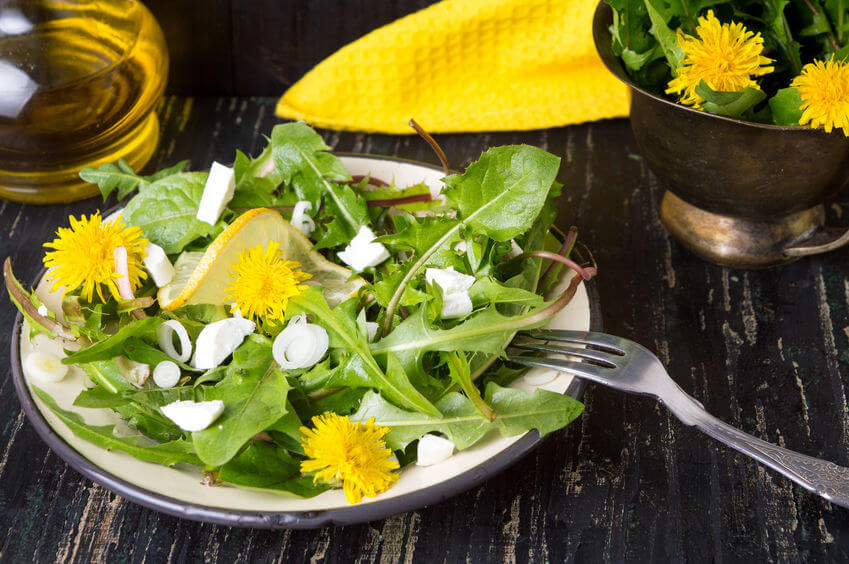 Most people associate dandelions with an undesirable weed that is very difficult to eradicate, but, yes, dandelions are good to eat. You just need to be careful about the environment that you get your dandelions from. Herbicides and other harmful substances can contaminate the plants. So make sure you follow safety precautions before you eat a dandelion.

Dandelions are well established throughout the world. Even though they are native to Eurasia, they have spread successfully. You can find them in Australia, New Zealand and South Africa.

Dandelions have been introduced to new locations throughout history. They were valued for their medicinal properties. Even the puritans brought dandelions with them from Europe.

Dandelions, no doubt, have also been spread accidentally. The transportation of other plants in soil has certainly brought dandelion seeds along with it.

Additionally, once established, the dandelion is a species that reproduces easily.

Its seeds get carried in the wind for miles. This can help them spread over large distances in a short time.

Dandelions thrive in temperate climates. In places where there is a cold winter, they go dormant.

Their long taproot can penetrate from just a few inches to about 10 feet deep. They can live on soil that will support most types of grasses and are very common on lawns.

About the only areas where greenery is common but dandelions are not is the tropics. It is more difficult for dandelions to thrive there.

Are Dandelions Safe To Eat?

Dandelions are safe to eat. But as I mentioned in the intro, herbicides and other contaminants are a danger. You want to be sure that you harvest dandelions safely.

It’s hard to say if it’s safe to eat dandelions from a lawn that has been previously treated with herbicides. There may be a residual danger as the dandelion is a perennial. If a plant has been around for many years, it may have collected some chemical residue.

It’s best to get your dandelions from places where herbicides and chemicals haven’t been used.

If you can secure a source where you know this is the case, then it should be clear sailing.

Dandelions are not only safe to eat, they’re rich in vitamins and minerals. Dandelions are a very nutritious food. A common use is to harvest the leaves and use them in salad after you clean them.

According to the USDA, one cup (55 grams or about 2 ounces) of dandelion leaves will provide you with the following nutrients:

Some of the standouts here are Magnesium, Potassium and Iron. Dandelions are also a great source of vitamin K.  The 2 ounce portion will provide about 428µg.

So, as you can see, dandelions are great for providing nutrition that might otherwise be hard to find.

How To Eat Dandelions

Dandelions can be eaten raw. Think of them as an ingredient you can use for salads.

The leaves and flowers are probably the best parts.

The stems do have a white sap inside. This is probably the only part you want to avoid. There are reports that it has a laxative effect (this can either be a problem or benefit.)

The root of the dandelion is covered in a brown skin, but the inside is white.

Dandelion root can be used in the same fashion as most root vegetables. The root is said to be good for liver detoxification and is also rich in vitamins and minerals.

They can be eaten raw, made into tea, or a decoction (liquor) can be made.

Dandelion leaves can have a bitter flavor. Some say they taste similar to arugula leaves. If you don’t like the bitterness, you can wait to pick them in the fall. This may help reduce the bitter flavor. Another option is to soak the leaves in water.

How To Cook Dandelion Leaves

We mentioned that dandelion leaves can be eaten raw. But you can also cook them and retain the nutritional value.

A popular way to cook dandelion leaves is to stir fry them. Just put some olive oil in a pan, drop in your favorite spices or sauces, and add a bunch of dandelion leaves.

Of course you can combine them with meat if you like.

The stir fried dandelion leaves are a great topping over a bed of rice.

Note that when you cook the leaves, they will shrink significantly. This is a similar shrinking to what you would see with spinach leaves.

How To Cook Dandelion Roots

While you can eat them raw, cooking dandelion roots is probably your best bet.

When you first gather dandelion root, you may want to soak them in water for several hours. This helps rinse and slightly tenderize them.

You then have a few options.

A popular way to prepare the roots is to bake them. This dries the roots and makes them ready for consumption in a beverage.

How To Make Dandelion Tea

Dandelion root tea is renowned for its health benefits. It’s known for improving digestion as well as liver function.

If you have a coffee grinder, you can chop up pieces of dandelion root and then grind them into a coarse powder.

Next, take the powder and put it in a tea bag and steep it in some hot water. Start off with a teaspoon per cup and from there you can experiment with more or less.

Some people find the taste of dandelion root tea off-putting. You can help by adding other flavors. Chickory is a popular ingredient for mixing with dandelion root. This will produce a flavor similar to coffee.

You can try all sorts of different herbs, spices and other roots to add to your tea blend.

Imagine the fun of perfecting your own custom dandelion tea blend that will taste great and be good for you!

If the bitterness of dandelion leaves is not to your taste, you can use the flowers instead. Dandelion flowers can be prepared to have a less bitter flavor.

You can deep fry them or even make dandelion wine with them.

When picking dandelion flowers, try to pick the newer growth. As dandelion blossoms age, they will start to transition to their seed stage.

When you pick the dandelion flower, try to remove as much of the stem as possible. This will help cut down on the bitterness. Once you have collected your dandelion flowers try to let them dry for a bit.

Deep-fried dandelion flowers can be sweet and crunchy. This is contrary to the reputation that dandelions have for being bitter. The key, of course, is preparation.

Try to pick young blossoms with as little green stem material as possible. This recipe works with about 40 dandelion blossoms.

Here are the ingredients you’ll need for the recipe:

Take the blossoms and then toss them in the flour and spice mixture. Make sure they’re evenly coated and allow any excess to fall away.

Heat the butter or oil in a large skillet.

Place enough of the dandelions in the skillet to cover about half of it. Try not to overcrowd the skillet.

Cook the dandelion flowers in the skillet until they’re golden brown. This should take about 5 minutes with occasional stirring.

Once they’re done, place them on a plate covered with paper towels. This will help drain the excess oil or butter.

Dandelions can be a healthy addition to your diet. Just make sure to follow safety precautions and avoid contamination.

Dandelions have great benefits as they’re rich in vitamins and minerals. They can, however, become contaminated by herbicides, pesticides, chemicals and animal droppings.