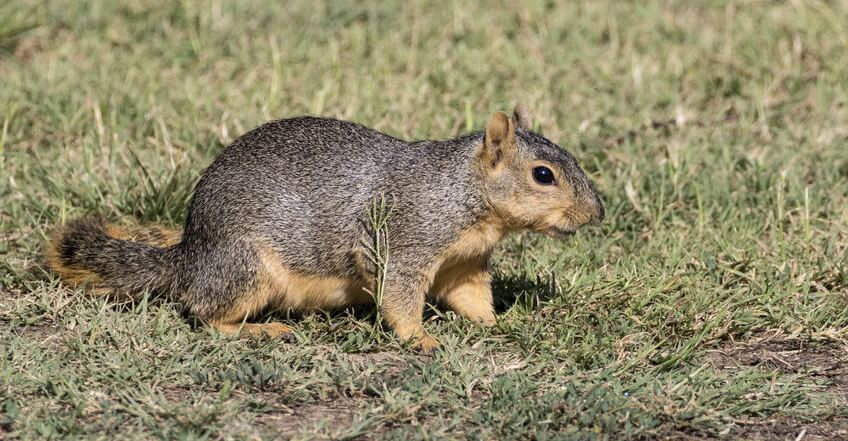 In short, yes, you can eat squirrels. But before you start munching, make sure you’re aware of all safety and legal aspects.

You’ll want to be safe about any potential diseases that a squirrel can carry. You’ll also want to know local laws about hunting squirrels.

Is It Safe To Eat Squirrel?

Humans have been eating squirrels for a long time. So, there is plenty of experience to learn from. On the food safety front, here are some considerations:

As an example, Lyme disease is spread by ticks that attach themselves to squirrels. So, while the meat wouldn’t be a problem in this case, the ticks that can be hidden under the fur can be a problem.

Fleas are another potential disease vector that would exist on the outside of the squirrel. Squirrels are rodents and spend lots of time on the ground and in brush full of fleas and ticks.

As for the meat itself, parasites can be an issue with squirrels. This can usually be remedied by cooking the meat thoroughly.

Pesticides and herbicides are commonly used in populated areas where squirrels live. They can be difficult to detect in many cases.

Squirrels eat seeds, nuts, and other plant materials. These foods can be contaminated by toxins that can get into the squirrels meat and then into you.

So, if you’re in an area contaminated by pesticides and herbicides, exercise caution.

Safe meat handling is another aspect to look out for. You’ll need to ensure that you handle meat carefully and cook it to the right temperature. If you’re going to be storing your squirrel meat, make sure you freeze it. Finally, make sure you read all national and local safety guidelines about eating game.

For more information check out this CDC site.

Can You Hunt Squirrels In Your Yard?

For city dwellers, the chances of being able to legally hunt squirrels  in your yard are slim.

You’ll definitely want to check with your local DNR. They will be able to tell you how you can legally hunt for squirrels.

Getting out of the city might be a requirement.

The method you’re planning on using will also be affected by laws.

Trapping, firearms, archery including slingshots, and airguns may all have different regulations.

For all of these hunting methods, you may need to get different types of licenses and permits.

There may be some exceptions to these rules in certain areas.

Nuisance animals can be hunted freely is they’re declared a nuisance.

Baiting squirrels for hunting is also something that is regulated.

There may also be squirrel hunting seasons. They may last a few days of months. In highly regulated areas, you may also find a bag limit on how many squirrels you can hunt over a given time period.

There are also multiple species of squirrel. Some are protected from hunting.  Flying squirrels are an example of a squirrel species that is usually illegal to hunt.

The common grey squirrel on the other hand is plentiful and one of the most easy to find squirrels out there.

So, make sure you familiarize yourself with the rules and the species in your area before you go out squirrel hunting.

If you’ve gotten some squirrels either from hunting or from another source, it’s now time to prepare it.

You’ll want to start off by gutting and skinning it as quickly as possible. The skinned and gutted squirrel will yield about 3/4s of a pound of meat.If it’s going to be a while before you can cook the squirrel, make sure to get the meat in a cooler with ice to preserve the meat. It can also help to prevent gamy taste.

As for portion size, you’ll want about 1/2 a squirrel per person. Of course, for some big eaters, this might not be enough. Also, cooking the squirrel will shrink it further.

Recipes for squirrel include squirrel stew and pan fried squirrel.Of course, there are many other ways. In this article, I will cover pan frying a squirrel.

Remember that the recipe is open to your interpretation. You can modify it to your liking. Add peppers and make it spicy or even buffalo sauce.

Squirrel meat is very tasty. But it has to be prepared properly. It’s very lean and mild and can be easily overcooked.You can use squirrel meat in just about any recipe that would call for chicken.

Here are the ingredients:

Place the squirrel quarters in the milk or egg and let them sit for about 5 minutes.

While the squirrel sits in the bath, mix the flour, salt, black pepper, garlic powder, onion powder and paprika in a ziplock bag. Shake the mix so that it is thoroughly combined.

You’ll also want a pan with about 1/2 inch of oil on medium heat.Make sure you have a cover for the pan.

Once the squirrel is done, set it on a plate with paper towels, This will help collect some of the excess oil.

Squirrel goes great with many side dishes. A favorite is potatoes. You can go with baked potato or fries. It will work either way.

A great benefit about squirrel is their nutritional profile.

A 3.2 ounce serving of squirrel has:

So, if you’re on a low carb, high protein diet squirrel is a great choice.

With some  research you can find out what your local laws are on squirrel harvesting. Once you find a good location, make sure you are aware of and are following all safety precautions..

Also, make sure to follow safe food handling procedures. Squirrel may seem like an old time dish that is not eaten any more, but this is far from the truth. So get out there and enjoy some squirrel.